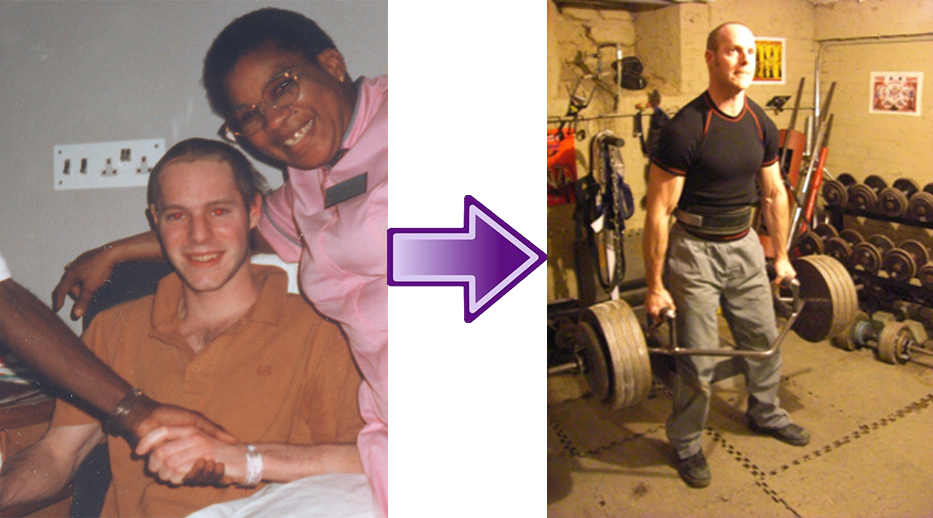 Tom Balchin suffered a major stroke in 1997 at 21 years old which paralysed the left side of his body. He became, as part of his own rehabilitation, a serious strength athlete and a martial artist, being awarded the grade of 3rd Dan in Taekwondo in 2008 whilst training around residual limitations of stroke. To do this, he developed hundreds of techniques and strategies. Now, for instance, he can deadlift 210kg, squat 170 kg and press 85 kg overhead for singles. He can also squeeze well over 90kg of pressure with each hand (dynamometer measure). His stroke-affected left hand has gone from nothing to actually being stronger than his right.

Tom tells me that the methods he used in his self-training are easy to do, didn't involve weights until he became a more advanced stroke survivor, are current in the evidence-base, very copyable by others and can certainly be mirrored by those who want to be the best they can be, however young or old.

His vocational rehabilitation was done by returning back to finish his first degree and then teaching taught for two years in a 5-13 school. He then went on to complete his MA(Ed) and Phd and spent three years as research fellow/lecturer in at Brunel University, London and then as MA course leader at Reading University. He completed a major handbook (The Routledge International Companion to Gifted Education) and has also written many peer-reviewed papers within the advanced learning areas. He also book series ready for publication.

Tom shows me the first of these, entitled: The Successful Stroke Survivor’: the New Guide to Functional Recovery from Stroke’. It is an impressive book: part manual and part guide. Tom has described his whole system for stroke recovery, which runs to 490 pages. Each strategy is illustrated with five or six sequenced illustrations so that stroke survivors cannot get confused. Tom tells me that this whole book has gone through physiotheraphy best practice guidelines approval and is currently available in evaluation copy only. But it will shortly be available on the shelves.

Tom is most well known for founding The ARNI Trust (Action for Rehabilitation for Neurological Injury): an exciting UK-based development in the field of stroke rehabilitation, which has an international reputation for serious results. Operating since 2001, it is a registered charity formed in response to the very real demand throughout the UK from stroke survivors, who uniformly state that they are 'stuck in limbo' after coming home from hospital and finishing with neurophysiotherapy. Because ARNI techniques are having such good results with stroke survivors from 10 to 90 years old around the UK, eminent surgeons, clinical scientists and university specialists, NHS Stroke Network representatives, hospital directors and therapists working in the areas of neuro-rehabilitation are actively encouraging its efforts.

The UK National Stroke Strategy recognises the need for ongoing support and care to the stroke survivors who do not make a full recovery. The strategy makes it clear that this should be a long-term approach, as: ‘…support to regain well-being – requires…continuing support from a wide range of community-based services, such as exercise classes.’ The training ARNI offers is aligned to neurological literature which explains that stroke survivors also need functional task-related practice and resistance training to encourage physical adaption, and to develop coping strategies. ARNI therefore is enabling those who are not able to do thousands of tasks that they were able to do pre-stroke, to perform such tasks again.

Since 2001, Tom has personally trained over a thousand stroke survivors and professional trainers & therapists. The ARNI approach contains an abundance of techniques which are designed to prime the body for this task-related practice and drive plastic changes… with the aim of conquering the functional barriers they are facing. His developed programme has taken influences from many different fields to effect neuroplastic change, to combine with deep examination of the physical coping strategies used to achieve mastery over changing limitations. Four 2-day workshops a month disseminate the knowledge to growing numbers of personal trainers and physiotherapists around the UK.

The programme was formalised into a Certification in 2006 for professional instructors and has morphed into the well-regarded ARNI Trust Functional Training After Stroke course in 2008, accredited by Middlesex University at specialist instructor level. This is equivalent to one University module. In 2009 and 2010, 72 professional trainers throughout the UK were Accredited, and joined the ranks of ARNI Instructors throughout the UK who work actively with stroke survivors. Instructors are scoped for from the ranks of UK qualified cardiac instructors, most of whom own their own training businesses.

Tom has laid all his techniques available for fair trial. The UK South West Stroke Research Network have submitted a middle/large scale application for a 5 year national multi-centre randomised control trial. This will examine to what extent a difference is being made, over time, by exercise instructors use the ARNI methods. Other research underway includes a 48-week feasibility study by Brunel University using groups of stroke survivors in West London.

Tom says: '...certainly, an ARNI Instructor is very good at preventing a stroke survivor from re-entering the care-pathway again: through falling over and breaking a hip, for example. The manual will also be a vital addition to recovery efforts, and I'm looking forward to people being able to use it as a tool to help them.' learn new strategies for recovering action control and coping with physical limitations caused by stroke'.